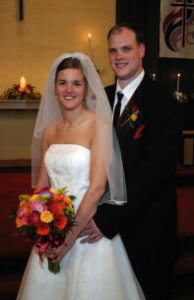 Our parents are Darrell and Sharon Nunamaker of Gibson City, IL and Ernest and Brenda Wieburg of Pekin, IL.

Carrie received a Bachelor of Science degree in Business Administration, with a minor in Insurance, from Illinois State University in Normal in 1999. She began working for her alma mater in October 2011 in the College of Arts and Sciences as a Business/Administrative Associate.

Chris received a Bachelor of Science degree in computer science from Eureka College in 1998. He is has worked for Bliss McKnight, Inc. in Bloomington, IL since April 2001 beginning as a Technical Analyst, and promoted to Senior Technical Analyst in 2012.

We live in Bloomington, IL with our Corgie/Australian Shepard Suzy (8), and our Tabby/Maine Coon cat Cooper (4).